“Retreat of Large Carnivores in the Giant Panda Distribution Range”, published in Nature Evolution & Evolution on August 3, which was the research result of ZHANG Li

“Retreat of Large Carnivores in the Giant Panda Distribution Range”, published in Nature Evolution & Evolution on August 3, which was the research result of ZHANG Li, professor of Institute of Ecology, Beijing Normal University, together with his cooperative partners, including Dr. LI Sheng, Principle Investigator at the School of Life Sciences of Peking University and Institute of Ecology of Peking University, Dr. WANG Dajun, Dr. SHEN Xiaoli, Associate Professor of the Institute of Botany, the Chinese Academy of Sciences (IB-CAS), as well as Smithsonian Research Institute of Conservation Biology, Sichuan Bureau of Forestry and Grassland and Shaanxi Bureau of Forestry and Grassland.

As the top predator in the eco-system, large carnivores play a vital role in maintaining the functions, structure and ecological process of the eco-system. Giant pandas (Ailuropoda melanoleuca) are considered as umbrella species of many other wildlife species distributed in the same area as giant pandas. However, there is still a lack of systematic research and evaluation on whether and how this effect of umbrella species protection can benefit large carnivores. LI Sheng Research Group has systematically collected the long-term monitoring data via infrared cameras since 2009, i.e. relevant data of 73 nature reserves in the giant panda distribution area, having made an all-round evaluation of the distribution status of large carnivores in the area and the changes in the distribution range compared with the historical distribution area. The data of 7830 infrared cameras monitoring sites in 5 mountain systems (Qinling Mountains, Mount Min, Qionglai Mountain, Xiangling and Liangshan) in the giant panda distribution area have been collected, with a total monitoring workload of 1.69 million camera days.

Among the four existing large carnivores, leopard and dhole live in forest habitats together with giant pandas. As shown through interviews with workers and local villagers in the reserve, leopard and dhole were still quite commonly seen until the late 1980s and early 1990s, but their populations declined sharply in the middle and late 1990s. Although the specific reasons for the decline are still unclear, habitat loss, poaching of carnivores and their prey species, as well as virulent infectious diseases transmitted by domestic animals may be key factors for such decrease.

Since the 1980s, the Chinese government has promulgated the Laws of Wild Animal Protection and has continuously implemented a series of nature reserve projects, including giant panda protection projects, natural forest protection projects and returning farmland to forests projects, etc. The implementation of these protection-oriented policies and measures has played a positive and effective role in protecting the giant panda population and habitats, but has failed to effectively curb the rapid decline of the large carnivore population distributed in the same region as the giant panda. As speculated by the author of the paper, the giant panda and carnivores may have significantly different habitat needs and ecological characteristics, resulting in a huge difference in protection results between giant pandas and carnivores. The home-range size of giant pandas is small (the individual home-range size is 5-13 km2), so a single nature reserve established for giant pandas (average range is about 400 km2) can basically maintain a wild giant panda population. However, large carnivores are featured by low density and large home-range size (the individual home range size can be more than 100km2). In order to maintain an effective breeding population, they must rely on large contiguous protected areas or protected area networks. In addition to relying on sufficient prey populations as a must, large carnivores are prone to human-animal conflicts (e.g. predation of livestock), thus being hunted in retaliation. All these make large carnivores more vulnerable to human pressure and difficult to be fully protected by the protection strategies and measures established for giant pandas.

As shown by the results of this research, in the past few decades, the large carnivores in the giant panda distribution area have seen drastic population decline and distribution area retreat. The results are consistent with the downward trend of large terrestrial mammals worldwide since the Anthropocene. In recent years, China has begun to build a system of protected areas with national parks as the main body. Giant Panda National Park has been included in the first batch of pilot projects in the national park system. The proposed giant panda national park covers a total area of 27,000 km2, covering large areas of habitats and potential habitats in the four mountain systems in the northern part of the giant panda distribution area. The pilot of Giant Panda National Park focuses on the authenticity of the eco-system and the integrity of the ecological process, hence providing a promising opportunity for the protection and restoration of large carnivores in the region. The United Nations has announced the period of 2021-2030 as the 10-year Ecosystem Restoration (2021-2030), of which the restoration of large carnivores will be an important component. This will be a long-term job that requires continuous efforts and full cooperation from all sides. Gradually restoring large carnivore populations and rebuilding trophic complexity in giant panda habitats will greatly enhance the resilience and sustainability of the eco-system in the region, thus benefiting more wildlife species, including giant pandas. 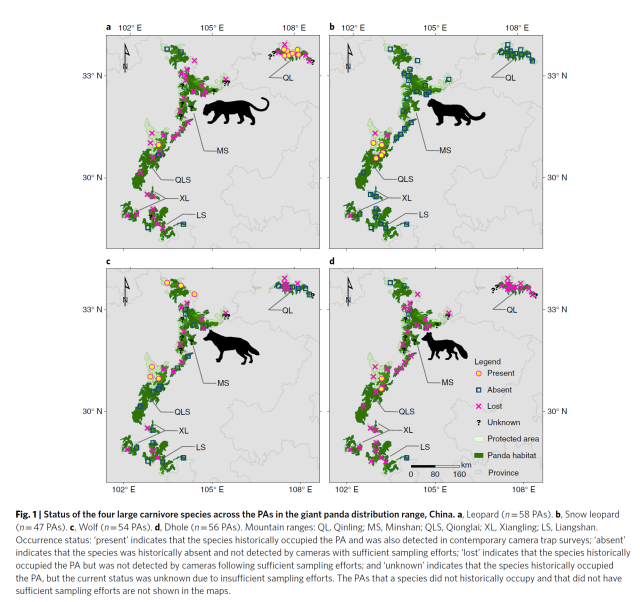